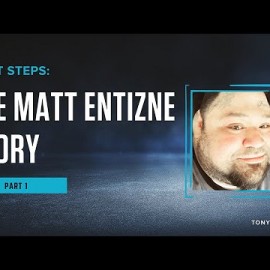 In January 2021, Matt Entizne had been bed-bound for more than five years.

Determined to make a change to transform his body and start moving again, Matt realized that he had to start by transforming his mind. He joined Tony Robbins’ New World New You Challenge after discovering it online by chance – and Matt’s life hasn’t been the same since.

In this video, Karissa Kouchis interviews Matt as he shares the inspiring story of how he lost his identity and reclaimed his life using the content available in Tony’s free challenge. He also reveals what he did after the challenge to keep his momentum high.

By connecting with his peers inside of the Facebook group and sharing his challenges, Matt made incredible progress along the way. He began exercising from his bed while still on oxygen. Today, he’s no longer on oxygen – and he defied the odds by proving the doctors who said he would never walk again wrong by taking his first steps all over again after restoring strength in his legs.

Matt credits his success with practicing visualization, the ability to reassess a situation, and one of Tony’s key teachings: “Divorce your story and marry the truth.”

Matt says: “I’ve divorced myself from the past and stepped into a new identity for the future.”

Now, Matt will continue his inspiring journey by joining Tony at Unleash the Power Within!

About Unleash the Power Within

Unleash the Power Within is the signature event designed by entrepreneur, best-selling author and #1 personal development leader Tony Robbins. This revolutionary four-day seminar has been attended by millions of people around the world for its renowned, life-changing content.

Hosted by Tony and a team of leading experts across multiple industries, participants learn methodologies to break through all limits and create an improved quality of life with unlimited energy and passion. Each day of the event focuses on key areas of life to improve, including security, spirituality, relationships and health.

Now available as an immersive virtual event, Tony Robbins and Unleash the Power Within are reaching more people than ever before. With record-breaking attendance, virtual events have drawn crowds of more than 30,000 people from 195 countries.

Learn more about Unleash the Power Within: https://www.upwvirtual.com/